Archive for the tag “blondie” 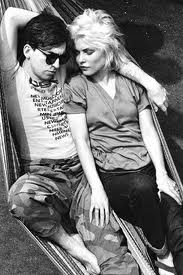 I’ve been a fan of Blondie since their first record came out and I was only 12 or 13 in 1976. I’ve seen Blondie perform live quite a few times over the years and even had a backstage pass once.

One time I met Chris Stein by chance. It was in a NYC night club in the 1990s when he and Debbie Harry had another musical project called “The Jazz Passengers.”

I was hanging out in the back, by the bar, with a friend and there was Chris Stein at the bar. My friend bought him a beer and he chatted with us a long time and even hugged me and gave me a big kiss. Debbie was more in the background. She seemed shy and gave me a shy smile and said, “I had too much wine with dinner.” But when she got onstage she was energetic and very entertaining.

Happy birthday to a great talent and very down to earth person!

Here’s a video of Chris and Debbie performing “Heart of Glass” which they co-wrote together years before it became a hit. This version is very different — enjoy!

One time in the early 1990s I was on my way to a show in NYC via Path station. My friend recognized Clem Burke and wanted to go talk to him.

I don’t like to bother famous musicians in their spare time. If they are at an event where it’s all about them, or if I am interviewing them, that’s a different story. But from what I’ve read he’s very humble.

Clem, to me, was always an exceptional drummer. Definitely one of my favorites.

Clem is probably best known for his work in Blondie, but he has performed with so many other famous musicians and bands including Iggy Pop, Pete Townsend, Chequered Past, The Fleshtones and Joan Jett — to name a few!

One of my favorite outdoor summer concerts was seeing the Shangri-Las at City Hall in NYC, June, 19, 2004.

There was only one remaining member, Mary Weiss, and her daughter and it was still a dynamic show.

Even though the Shangri-Las were before my time, I was no stranger to their music because every band I loved covered their hits. Aerosmith recorded “(Remember) Walking in the Sand” for their “Night in the Ruts” album; I had a bootleg Blondie album of them doing “Out in the Streets”; and Johnny Thunders not only performed their hit “Great Big Kiss” every time I saw him live, he sometimes wore a Shangri-Las t-shirt. “Great Big Kiss” is featured on Thunders’s best solo album, “So Alone” and the lyrics are slightly changed to suit his bad boy image, as opposed to the Shangri-Las bad girl image.

But I think the Shangri-Las are most known for their hit, “Leader of the Pack.”

The girls formed their group while still in high school in the 1960s.

On that hot summer day when I saw them at City Hall, they did all their hits, plus some Ronettes songs, “Da Doo Ron Ron” and “Be My Baby.” They also did “Locomotion” and other oldies.

The short set was only 40 minutes, but then they went over to J&R Music to sign autographs. The line was pretty short, so I bought a CD and met Mary Weiss and the other ladies for the fun of it.

Shangri-La member Mary Ann Ganser died on March 14, 1970. Reports of cause of death varied: encephalitis, a seizure disorder or barbituartes.

Many artists continue to pay tribute to the Shangri-Las covering their songs.